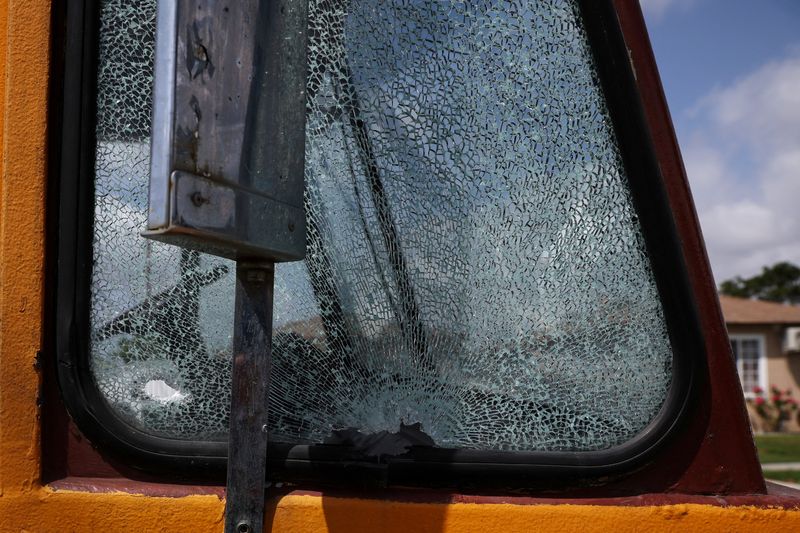 © Reuters. FILE PHOTO: The window of a vehicle with the “Ghetto Life” motorcycle club sits shattered with a bullet hole, at the scene of a shooting where two people were shot dead and five wounded according to local media reports on Sunday, in the Willowbrook commun

WASHINGTON (Reuters) – Fed-up Democrats in San Francisco and Los Angeles, liberal-leaning California cities reeling from COVID-era spikes in homicides and gun violence, may punish their own party at the polls next week over its criminal justice policies.

San Francisco’s progressive district attorney, Chesa Boudin, is likely to be pushed out of office in a recall vote, while voters in Los Angeles will be choosing a new mayor – with an ex-Republican as a leading candidate.

The results could send a blinking-red warning to Democrats ahead of November’s midterm elections.

In congressional and local races across the United States, Republicans have seized upon calls by progressives to reduce police department budgets and other liberal criminal justice policies to paint almost all Democratic candidates as lenient on crime.

Democrats have struggled to formulate a persuasive rebuttal, even as a new wave of moderates, such as New York Mayor Eric Adams, has urged them to take a more tough-on-crime approach.

In April, the pollster Gallup found concern over crime was at its highest level since 2016, with 53% of Americans saying they worried “a great deal” about it. An ABC/Washington Post poll in May showed Americans trusted the Republican Party over Democrats to handle crime by 12 percentage points.

But focus groups also show Americans increasingly worried about the proliferation of firearms. That is an issue that Democratic consultants said the party’s candidates could hone in on, shoring up their support with suburban and Black voters by explicitly tying lax gun laws to surges in crime.

“It is absolutely something Democrats can and should be using to combat against the increasing narrative of their being soft on crime,” said Angela Kuefler, a strategist who advises Democratic candidates on gun issues.

Kuefler noted there is widespread public support for enhanced background checks of gun purchasers and actions to decrease the flow of illegal guns into cities.

A series of mass shootings – including last week’s at an elementary school in Uvalde, Texas, which left 19 children and two teachers dead – has reignited the U.S. debate over policing and guns.

President Joe Biden has tried to balance a push for changes in policing from the more radical wing of his party with voters’ concerns about security. An executive order last week, for instance, established guidelines for the use of deadly force by federal law enforcement officers.

Boudin, on the other hand, embraced a strong progressive agenda in San Francisco – and appears to be paying the price.

Boudin was elected in San Francisco in 2019 after pledging a series of reforms, saying he would not try juveniles as adults, would not push for sentencing enhancements for certain crimes that can add years to prison sentences, and would not seek cash bail for any defendant.

He largely followed through on his promises, which also included diverting low-level offenders away from incarceration to reduce the city’s jail population.

Residents, including some deep-pocketed Republicans, blamed Boudin’s policies and launched a recall petition.

“It is a radical ideology that has upset everyone: left, right, gay, straight, young, old, male or female,” said Richie Greenberg, a local independent activist and spokesperson for the recall effort.

Boudin’s supporters say robberies and other crimes shifted from tourist areas to residential ones as a result of the pandemic, creating the perception of a crime surge. They point to data that shows a more nuanced reality, with assaults and rapes decreasing during the period, even as homicides and shootings increased.

Still, said Lara Bazelon, a law professor at the University of San Francisco and a Boudin defender, “People are feeling less safe regardless of what the stats say.”

Opinion polls show Boudin likely to be recalled on Tuesday. A replacement would be chosen by the city’s mayor, London Breed, a Democrat who has criticized Boudin but has not taken a stance on the recall.

In Los Angeles, Rick Caruso, a billionaire developer and former Republican, is battling U.S. Representative Karen Bass and a host of other liberal candidates in the mayoral election.

Caruso, who has spent more than $30 million of his own money in the campaign, made crime the centerpiece of his candidacy in a city that saw homicides reach a 15-year high in 2021. That forced Bass, a longtime progressive champion in Congress, to move to the center and pledge to put more police on the streets. Caruso and Bass could be headed to a runoff, polls show.

Republicans think crime could be a winning political issue in a number of congressional races, including in the suburbs of Minneapolis, New York City and Portland.

The party has already gone after Democratic Senate candidates in battleground states on crime, with Cheri Beasley in North Carolina an early target.

Republican-funded TV ads have assailed Beasley’s record, saying in one that she “failed to protect” child crime victims. Beasley, the former chief justice of the state Supreme Court, on Twitter (NYSE:) called the ad “misleading” and warned more were to come.

She answered with an ad of her own, touting her efforts as chief justice to keep human traffickers off the streets.