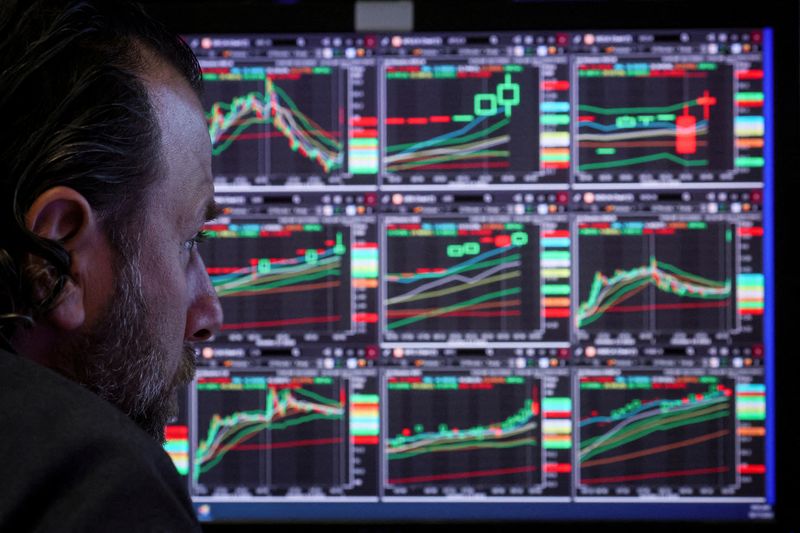 One-month daily volatility for the , which measures how much the index has moved over the past month, has climbed to its highest level since early July. The index has logged 40 moves of over 2% in either direction this year, a number only surpassed during the height of the pandemic selloff in 2020 and, before that, the depths of the financial crisis of 2008-2009.

The latest came on Friday, when fresh hopes that the Federal Reserve would slow its monetary policy tightening ignited a midday rally. The S&P 500 gained more than 2% for the day, after being down as much as 0.5% earlier in the session.

“We are seeing large moves not just to the downside … but surges to the upside as well, as investors appear to be chasing returns through year-end,” said Anand Omprakash, head of derivatives quantitative strategy at Elevation Securities.

Among factors fueling the swings is a flood of options trades, many of them short-term in nature. One-month average daily trading volume in the U.S. listed equity options market stands at 43 million contracts, just shy of a record, and about 20% higher than a year ago, according to Trade Alert data.

A surge in options trading tends to boost hedging by market makers – typically large banks or financial institutions that facilitate the trades and need to position in equity futures to reduce their risk from unexpected market moves.

“I expect these hedging flows to likely exert the most influence during low liquidity periods, and following important macro news events,” he said.

A rise in trading of options contracts that expire in less than a day further exacerbates the swings, as their proximity to the expiration date makes them particularly sensitive to stock fluctuations and necessitates increased hedging, market participants said.

Trading in S&P 500 options with one day or less to expiry has grown to be 50%-60% of the volume, up from 10%-30% earlier this year, according to Kochuba, founder of analytic service SpotGamma.

Meanwhile, many so-called “real money” investors such as pension funds and mutual funds have cut their stock allocations to the bone after months of equity volatility, another factor fueling stock swings.

“The recent volatility is … a result of ‘real money’ sitting on their hands and not being there to either buy into weakness, nor sell into rallies,” said Michael Lewis, head of U.S. equities cash trading at Barclays (LON:).

Deutsche Bank (ETR:)’s measure of consolidated equity positioning has been lower only about 6% of the time since January 2010. Data from Goldman Sachs (NYSE:) prime brokerage showed net leverage on hedge fund portfolios at its lowest level since March 2020 in the week of Oct 7.

A pickup in correlations between individual stocks also has added to the abruptness of the moves. The Cboe 3-Month Implied Correlation Index, which measures the 3-month expected average correlation across the top 50 value-weighted S&P 500 stocks, stands at 53.53, near a 2-year high, and 18 points above its 5-year median.

When stocks all move in sync on the same catalysts there is less chance of one group of stocks offsetting moves elsewhere. Instead, higher correlation can lead to the market lurching one way or the other with heightened speed.

“It’s become a macro market where individual catalysts themselves don’t matter as much as macroeconomic themes,” Elevation’s Omprakash said.