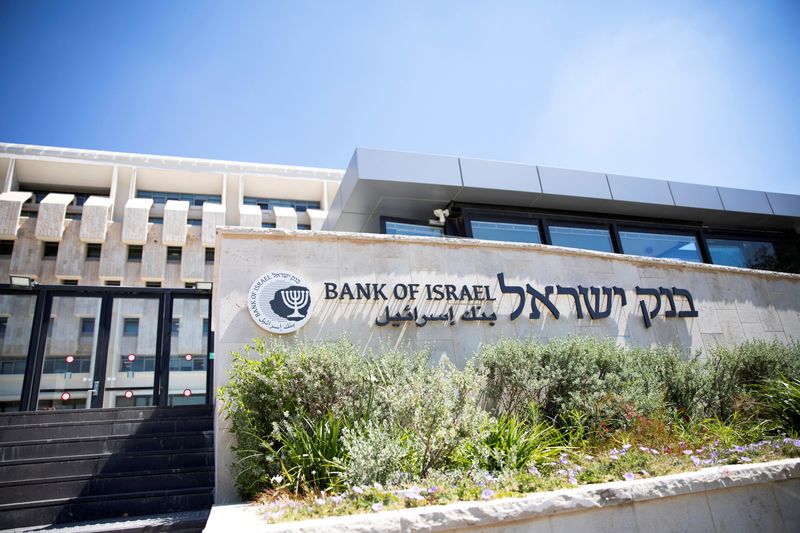 JERUSALEM (Reuters) – All six rate setters at the Bank of Israel supported raising the benchmark interest rate by 0.5 point to 1.25% at their July 4 meeting in a move that escalated a battle against rising inflation, the central bank’s minutes showed on Monday.

The hike, which had been expected, was the third straight rate rise since April and the tightening cycle is expected to last into next year, aimed at curbing increasing price pressures.

“The Committee members’ assessment was that the Israeli economy is recording strong growth, accompanied by a tight labour market and an increase in the inflation environment in Israel and worldwide,” the minutes said.

It said that the Monetary Policy Committee (MPC) decided that “conditions support a continued process of increasing the interest rate”, with its pace dependent on future economic and inflation data.

At the same time, the bank cited sharp U.S. rate hikes and the start of tightening in Europe.

The next rate decision is slated for Aug. 22. Economists project another half-point rise and at least a 2.75% interest rate by next year.

Inflation at the time of the decision had reached a 4.1% annual rate. In June, it gained to a 14-year high of 4.4% — above an official 1-3% target but half the level of the United States and Euro bloc.

Policymakers blamed much of the inflation spike on supply chain disruptions, gains in oil and other commodities prices and a weaker shekel, as well as rising domestic demand and a full-employment economy with wage pressures in most private sector industries. The jobless rate stood at 3.4% in June, official data showed on Monday.

“Committee members were of the view that at the current time, the risks of inflation are contingent on global developments, particularly in Eastern Europe, and on domestic factors such as increases in wages,” the minutes said.

After an 8.2% spurt in 2021, Israel’s economy is forecast to grow 5% this year. The central bank expressed some concern of an adverse impact to Israel’s high-tech sector, a main growth driver, but said that unlike the crash in 2000, “today’s high tech industry is more dispersed, entrenched, and has access to sources of financing.”

How Gut Bacteria Influence Your Metabolism