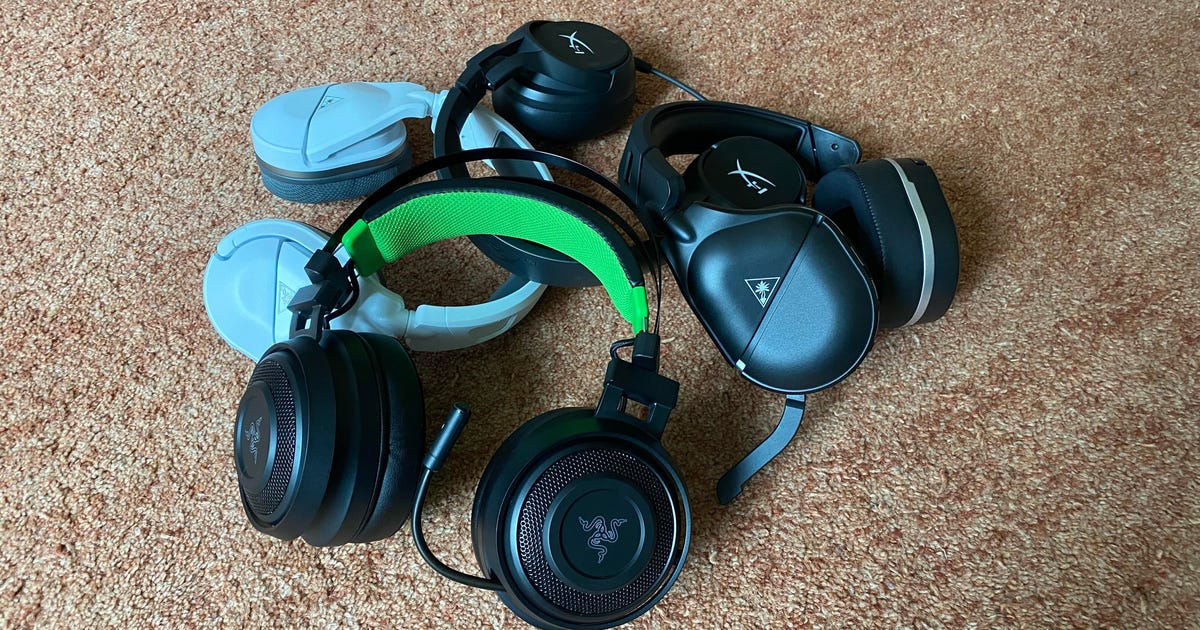 While you technically could use a regular pair of headphones for gaming, that doesn’t necessarily mean that you should. For those who take their gaming seriously, the fuzzy audio from a subpar headset could end up being the difference between sweet victory and crushing defeat. If you’re looking to take your gaming performance to the next level, grabbing a good set of gaming headphones that provide clear, immersive audio, allowing you to hear every shot and step around you, is a good place to start.

Whether you’ve got a trusty Xbox One, or a mighty new Xbox Series X or Series S, a wired headset is an easy and affordable option. Both generations of controllers feature a standard 3.5mm headphone jack, so it’s a simple plug-and-play setup. Plus, it’s also worth noting that many, if not most of the best Xbox headset options in the wired gaming headset category also work just fine with the PlayStation 5, Windows PCs, Macs and the Nintendo Switch.

If you want to eliminate the cord that goes from the controller to your headphones, however, there are plenty of wireless headset options too. The nice thing about them is that most don’t require a USB dongle to connect wirelessly (most PS4 wireless headsets do, for example). Microsoft’s Xbox Wireless technology allows you to quickly pair with your Xbox sans dongle. Wireless models that require dongles are specifically noted below.

In making these picks, we focused mainly on a few key variables, including design (build quality), comfort and sound quality, as well as extra features (think noise cancellation, noise isolation, detachable microphone and Bluetooth connectivity) along with price. Some even offer surround sound. We also took mic quality into consideration, because that’s especially important if your gaming session requires group coordination. If you can’t be heard, you can’t strategize.

Finally, so far as we know, all of the Xbox One wireless headsets listed here will also work with the Xbox Series X and Xbox Series S.

With those basics established, let’s talk about the best Xbox headset. These are the results of our own home-based testing, updated periodically, as well as some of the other most popular gaming headsets on the market at the moment. Any of these can greatly enhance your gaming experience, especially when settling in for a long gaming session.

Turtle Beach has upgraded its popular Stealth 700 headset, improving both its performance and comfort. The build quality is solid and I liked the “cooling gel-infused” memory foam ear cushions, which really fit my head nicely and play well with glasses. The headband is also sturdy and well-padded.

Turtle Beach says this Gen 2 model has improved 50mm Nanoclear drivers — the sound is more detailed and “precise” — there’s a redesigned metal-reinforced headband and a larger, high-sensitivity flip-to-mute mic. Its engineers tuned it to deliver even “more detailed and precise sound.” I thought it sounded quite good, and the headset pairs to your phone and is also good for music listening and taking calls while you’re gaming. There’s an “all-new” Turtle Beach Hub app for iOS and Android that allows you to tweak the audio and remap buttons.

This headset will work with older Xbox One consoles as well as the next-gen Series consoles. Battery life is now up to 20 hours — the headset charges via USB-C — and thanks to Xbox Wireless technology, you can connect wirelessly to the Xbox without using a dongle like you have to do with the PS4.

If you’re looking at this versus the step-down Stealth 600 Gen 2, which retails for $100, that model is also good but the Stealth 700 Gen definitely has a more premium feel to it. It’s really a good Xbox wireless headset for $150.

If you’re looking for a really solid wired headset with an affordable price tag, the HyperX Cloud X is an excellent choice. It’s sturdily built, has good sound with strong microphone performance and most importantly, it’s comfortable to wear for long gaming sessions. It’s designed to work with the Xbox One and the Series S and X, but is also compatible with the PS4 and PS5, as well as the Nintendo Switch and PCs.

The Razer Nari Ultimate for Xbox is a beast of wireless headset, at least in terms of size. That said, it’s not heavy and its auto-adjusting headband makes this one of the most comfortable gaming headsets you can buy; just note that its ear cups really stick out from your head. The ear pads are equipped with cooling gel-infused cushions, and the Razer logo lights up.

Aside from excellent sound quality and comfort, the other signature feature is the built-in HyperSense haptic feedback technology that lets you feel the game while you’re playing. One might call it a gimmick but it does add another dimension to the gaming experience. The only downside is that battery life takes a hit when you engage it. It’s 6 hours with HyperSense on and 20 hours with it turned off.

It’s worth pointing out that this is an open-back headset, which does help open up the soundstage and give the audio a more airy quality, but the sound will leak out of the headphones, which could annoy others around you. I found the microphone performance to be good but not stellar.

This will also connect to a PC wirelessly with an Xbox Wireless Adapter for Windows.

On the PlayStation and PC side, Arctis has its high-end Pro Wireless ($330), which some say is the best all-around headset for both those platforms. But for Xbox, the Arctis 9X Wireless is an excellent choice if you’re looking for a more premium wireless headset. It connects directly to the Xbox wirelessly without a dongle and can also be used with your phone with a Bluetooth connection. It delivers 20 hours of battery life.

If you can’t quite afford Turtle Beach’s new Stealth 700 Gen 2, the new Stealth 600 Gen 2 is a good alternative at $100. While it doesn’t have the more premium build quality of the Stealth 700, it’s a very comfortable headset with good sound and performance. The audio quality has been improved slightly, and like the Stealth 700, it’s equipped with a larger high-sensitivity flip-to-mute mic that seamlessly integrates into the headset when retracted (muted).

An audio preset button on the left ear cup allows you to quickly customize your audio, and thanks to Xbox Wireless technology, it’s easy to connect to your Xbox. Battery life is rated at 15 hours, and the headset recharges via USB-C.

The headset is pictured in white but is more readily available in black. The PlayStation version includes a dongle for wireless connectivity with the PS4 and PS5.

If you want a much more affordable alternative to the 9X, check out the Arctis 1, a well-designed (but less swanky) wireless model that sells for about $100. While you need to use a dongle (included), it works when connected to Xbox, Switch, PlayStation or even Android (the USB-C dongle includes a USB-A adapter cable). It’s a good value, with a detachable Discord-certified microphone, and battery life is rated at up to 20 hours, which is pretty decent.

Like the Steel Series Arctis 1 above, the HyperX Cloud X Flight uses a low-latency 2.4GHz USB dongle for its wireless connection to your Xbox instead of connecting directly sans dongle. This is a very comfortable headset with excellent sound and good microphone performance (the mic is detachable). It also has very good battery life (up to 30 hours), though you’ll need to turn off the LEDs on the ear cups to maximize battery life. Hopefully the next-generation version will move to USB-C charging (it uses Micro-USB).

As far as basic wired gaming headsets go, you can’t go wrong with the HyperX’s Cloud Stinger Core. It’s comfortable and has good audio quality and microphone performance. The build quality isn’t as good as some of HyperX’s step-up models, but you can’t expect everything for $40 or less.

The Quantum 100 is the entry-level model in JBL’s new line of Quantum gaming headsets, which run from $40 to $300. There’s nothing fancy about this model, but it’s pretty lightweight and comfortable with nicely padded ear cups, plus it has a detachable boom microphone. On the left ear cup there’s a volume control dial along with a microphone mute button. It also works with other game consoles and is pretty decent for music, though it’s a touch bright.

While some of JBL’s higher-end models feature wireless connectivity and even noise canceling, the Quantum 100 is just a basic gaming headphone that will appeal to more casual gamers on a tight budget.

Why China is still obsessed with disinfecting everything

A Vibrating Pill for Constipation Goes to the FDA