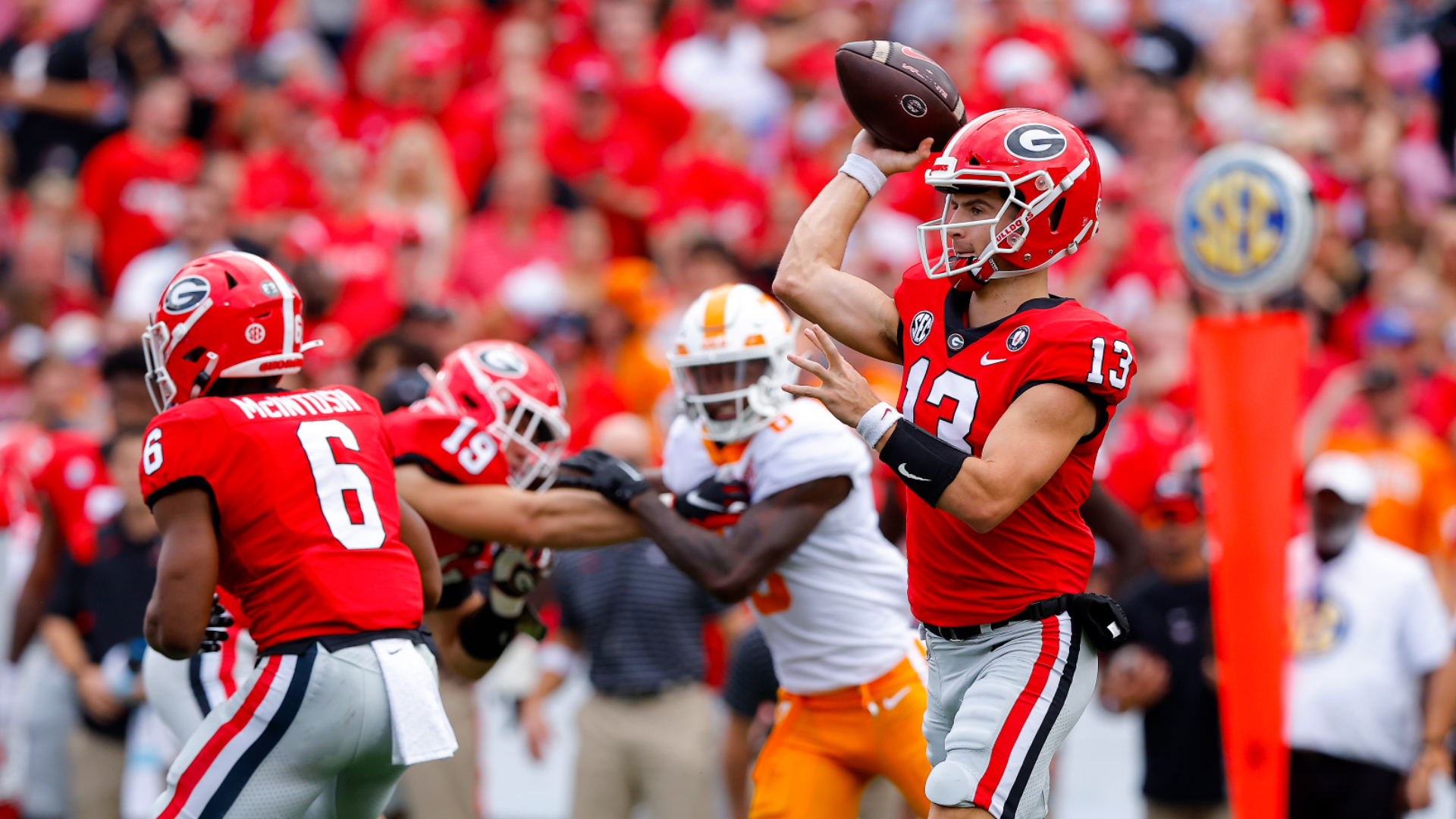 Week 10 of the college football season will have reverberations throughout the remainder of the 2022 season.

No. 1 Georgia demolished No. 2 Tennessee in the latest “Game of the Century,” one that severely hurt the Vols’ chances of making the SEC championship game and College Football Playoff.

Elsewhere, the cracks that showed throughout the season for No. 5 Clemson finally became too big to ignore in a 35-14 road loss at Notre Dame. The Fighting Irish have enjoyed quite the turnaround under first-year coach Marcus Freeman, whose team was finally the one that knocked Swinney’s Tigers from the ranks of the unbeaten.

And finally, LSU beat a top-10 opponent in Alabama, marking Brian Kelly’s first victory over Nick Saban in three tries. That loss will have impacts beyond this year’s race to the championship.

Other teams such as Michigan, TCU, Oregon, USC and UCLA took care of business, albeit in less-than-impressive fashion at times. Regardless, their victories on Saturday will keep them at or near the top of the rankings — an important distinction when it comes time for the Playoff committee to unveil its final four teams.

Here’s how The Sporting News projects the top 25 teams will look following all the Week 10 action;

There is no easier debate this week than who should be at No. 1. In fact, there is no debate at all: Georgia is the clear answer. The Bulldogs manhandled Tennessee’s high-powered offense in a 27-13 victory that was much more dominant than the score would indicate. Considering this was a rare “Game of the Century” and Tennessee actually outranked Georgia in the initial CFP rankings, then it’s clear Georgia should be on top.

The Buckeyes only beat Northwestern 21-7 in windy conditions in Evanston, Ill. But the fact remains that the Wildcats have only one win on the season, and an outcome like that could be detrimental to the Buckeyes’ rankings. At least, it would have been if it weren’t for several lackluster performances behind them.

The Wolverines overcame a brief — and scary — 17-14 deficit against Rutgers to win 52-17 on Saturday. That included a 38-0 second-half scoring advantage over the Scarlet Knights, one that keeps alive the possibility of an undefeated, top-three meeting with Ohio State at the end of the regular season. It’s possible the Wolverines jump Ohio State, but we think pollsters won’t want to rock the boat too much.

TCU is the latest team in the College Football Playoff mix, helped tremendously by a trio of losses ahead of them by Tennessee, Clemson and Alabama. The Horned Frogs might not be the strongest Playoff contender among the undefeateds, but they are undefeated. If that remains constant through the Big 12 championship game, then TCU will make the Playoff for the first time.

The Ducks have played like one of the best teams in the country all season (excepting that disastrous 49-3 loss to Georgia to open the season). But college football is a “what have you done for me lately” sport. And the Ducks are coming off a 49-10 demolition of Colorado that exhibited Bo Nix as a potential Heisman Trophy candidate.

Tennessee was overpowered in a disappointing 27-13 loss to Georgia. But that doesn’t expose the Volunteers as frauds or do away with the team’s five other ranked wins this year, which still rank more than anyone. The Vols are set up for an 11-1 finish that could still see them sneak into the Playoff. It’s all still in play, though those chances have diminished.

Expect Brian Kelly and Co. to get the “Bama bump” after knocking off the previously sixth-ranked Tide in a 32-31 overtime thriller in Tiger Stadium. The win was not only massive for LSU, but also put the Tigers squarely in first place for the SEC West division. If the Tigers win out, they’ll get a chance to play Georgia in Atlanta to claim SEC supremacy.

Caleb Williams continued to show his move to Los Angeles was a good move in a multiple-touchdown game vs. Cal. Could the Trojans have won by more over the Golden Bears? Probably. But on weeks such as Week 10, when multiple undefeated and one-loss teams fall in front of you, it doesn’t matter nearly as much. Regardless, the Trojans have a fascinating stretch run to end the season UCLA, a Notre Dame team that demolished Clemson and a potential run-in with Oregon in the Pac-12 championship.

UCLA is in much the same boat as its cross-town rival. The Bruins could have beat a sub-.500 Arizona State team by more. Again, losses in front of the Bruins took the heat off what could have been a more compelling victory. All the Bruins can do is win out, which would make for an interesting Playoff argument.

The top 25 could just as easily have Ole Miss in the 10-spot, considering they are one game better than the Crimson Tide on the record following the latter’s 32-31 loss to LSU. But Alabama — despite several un-Alabama struggles this year — has created significant goodwill among the polls for their long-standing success under Nick Saban. Whether that will be the case after taking on the Rebels in Week 11 remains to be seen.

“We’re the closest to them” – Ben Chilwell highlights what Chelsea must do to get on the “same level” as Liverpool and Manchester City...

Eat Better, Get Moving, but Don’t Fret Over Diabetes

Embryos could count as people in the post-Roe world