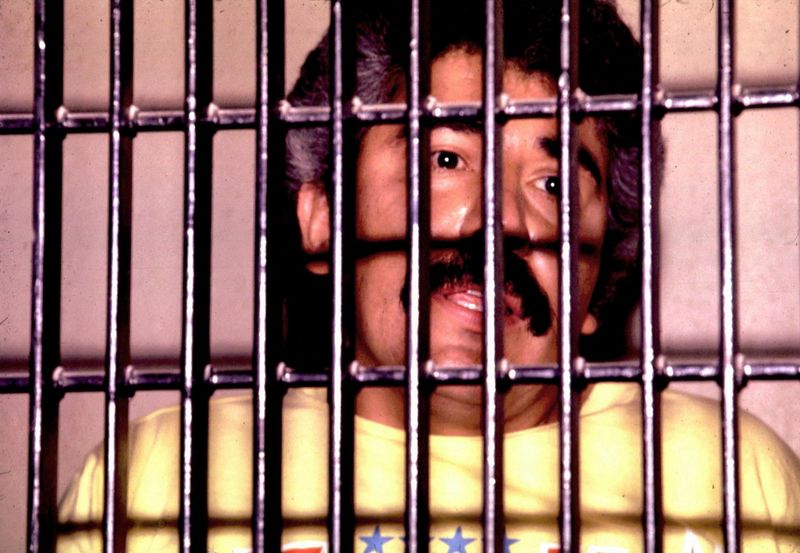 © Reuters. FILE PHOTO: UNDATED FILE PHOTO – Mexican drug lord Rafael Caro Quintero is shown behind bars in this undated file photo. Quintero won an initial appeal against his conviction and 40 year sentence for the 1985 murder of U.S. DEA agent Enrique Camarena. Quintero will stay in jail while prosecutors appeal against the ruling

By Lizbeth Diaz and Drazen Jorgic

The kingpin rose to prominence as a co-founder of the Guadalajara cartel, one of Latin America’s most powerful drug trafficking organizations during the 1980s, and had been among the most prized targets for U.S. officials.

A public database of people arrested by Mexican authorities shows Caro Quintero was detained on Friday, confirming what two sources said was an operation led by Mexico’s Navy.

The arrest comes after pressure from the United States, according to a Mexican official, and the same week that President Andres Manuel Lopez Obrador met with U.S. President Joe Biden in Washington.

Caro Quintero spent 28 years in prison for the brutal murder of former U.S. Drug Enforcement Administration (DEA) agent Enrique “Kiki” Camarena, one of the most notorious killings in Mexico’s bloody narco wars. The events, dramatized in the 2018 Netflix (NASDAQ:) series “Narcos: Mexico,” led to a nadir in U.S.-Mexico co-operation in the five-decade long ‘war on drugs.’

Caro Quintero has previously denied involvement in the killing of Camarena.

In 2013, Caro Quintero was released on a technicality by a Mexican judge. He quickly went underground and returned to trafficking, according to U.S. officials, who placed him on the FBI’s Top 10 most wanted fugitives list and put a $20 million bounty on his head, a record for a drug trafficker.

“It is probably one of the most important captures of the last decade in terms of importance to the DEA,” said Mike Vigil, the DEA’s former chief of international operations.

Caro Quintero, who last year lost a final appeal against extradition to the United States, will be extradited as quickly as possible, another Mexican official said.

While the 69-year-old Caro Quintero is no longer considered a major player in international drug trafficking, the symbolic impact of his capture is likely to be significant on both sides of the border.

For Mexican security expert Alejandro Hope, the arrest pointed to significant cooperation between the two countries despite recent clashes over security. “This type of capture is unthinkable without the participation of the DEA,” he said.

Mexico’s unwillingness to extradite Caro Quintero to the United States prior to his release from prison had always been a source of tension between the two countries. A U.S. official said Washington was very eager to have him extradited.

“This will hopefully start to mend the frayed relationship between the United States and Mexico in terms of combating drug trafficking,” said former DEA official Vigil.

The Many Medicinal Benefits of Cannabis and Cannabidiol (CBD)

Risky Business: Parents, Beware When You Make Your Kids Into Influencers