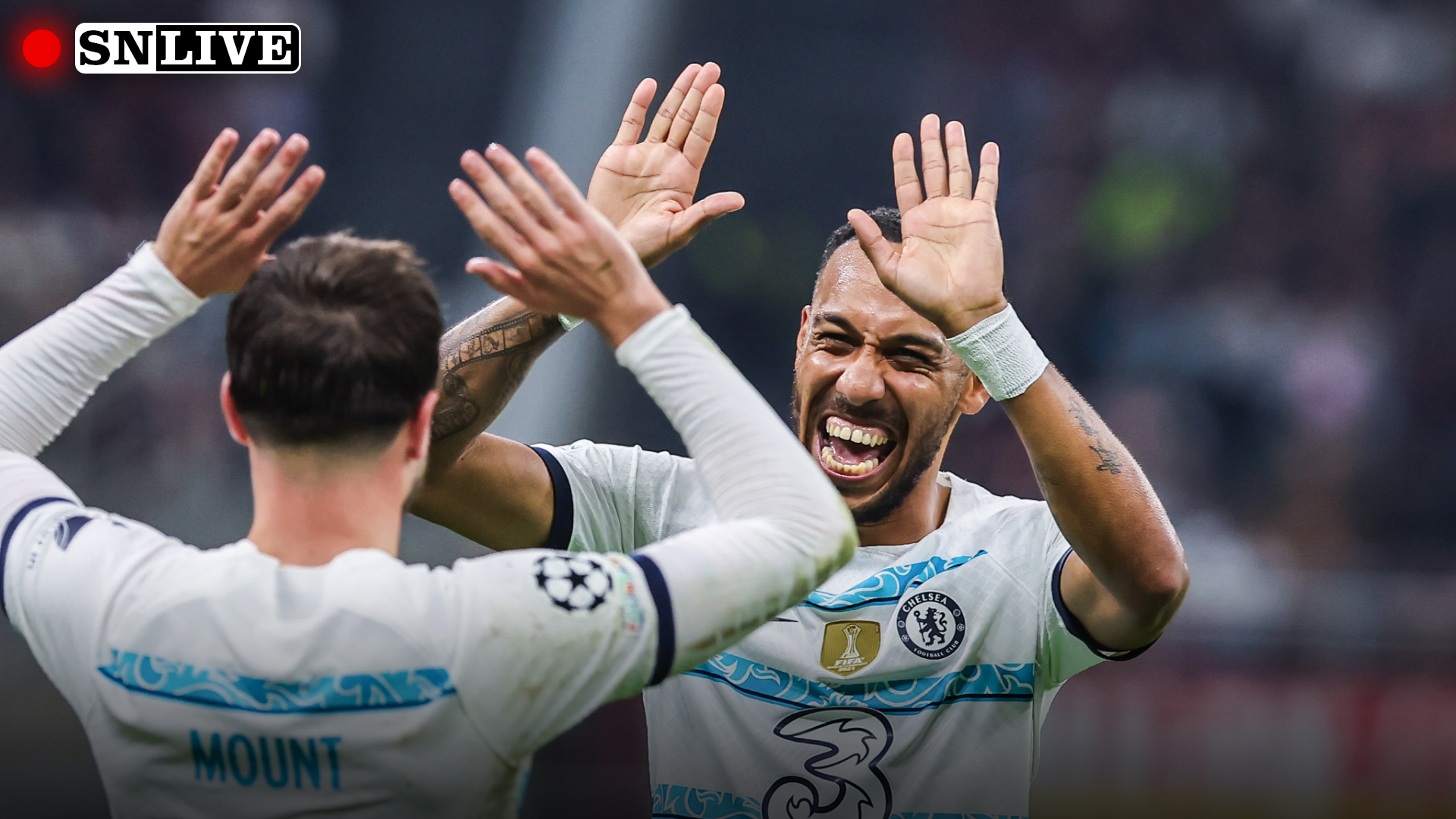 Chelsea face Red Bull Salzburg with Graham Potter’s side close to securing their place in the last 16 of the Champions League.

Back-to-back wins over AC Milan have seen the Blues turn around their fortunes in Europe after starting their 2022/23 Champions League campaign with a shock defeat to Dinamo Zagreb.

A stoppage-time equaliser by Casemiro stopped Chelsea from picking up three points at home to Manchester United on Saturday, but the Blues will be favourites to return to winning ways in Austria.

Red Bull Salzburg kick off the match sitting in second place in Group E. A result against Chelsea would boost their chances of making the last-16.

58 mins: Aubameyang gets on the end of a cross into the middle, but that was a difficult one for the Chelsea striker. Moments later, Kohn then makes a save low down to prevent Havertz from finding the back of the net.

54 mins: OFF THE LINE! Jorginho surely thought he’d scored with a header from a corner kick, but the clearance was made on the line and Salzburg survive!

53 mins: AUBAMEYANG… saved! What an opportunity for the Chelsea striker to put his team back in front, but Kohn comes off his line quickly to make the stop. That’s not the first time he has stopped Aubameyang from finding the back of the net tonight!

51 mins: Salzburg started the second half with a lot of energy and they have been rewarded for that. Keep in mind that this is a team that hasn’t lost a match at home in 40 games!

48 mins: GOAL! RB Salzburg 1 (48′ – Adamu) Chelsea 1 – The hosts are level and Adamu finishes well to get Salzburg back on level terms! The ball was played in behind the Chelsea backline and the young forward was on hand to cushion the shot past Kepa!

46 mins: Penalty claim! Salzburg believe they should have a penalty kick for a handball by Kovacic inside the box, but the referee rejects the calls. VAR has a look and no penalty is the decision.

45 mins: The second half is under way! No changes made by either team at the break. Chelsea have a 1-0 lead over RB Salzburg.

45+1 mins: HALF TIME! RB Salzburg 0-1 Chelsea: Kovacic’s goal is the difference between the two teams at the break, but Chelsea have been the better side on the whole as well. Aubameyang had a very good chance right at the end of the half – Kohn made the save low down!

45 mins: There be ONE minute of stoppage time played at the end of the first half.

43 mins: Potter will be pleased with how Chelsea have equipped themselves in the first half of this match. Salzburg have been limited to only a handful of half-chances while the away team have the lead and have looked dangerous.

41 mins: Salzburg create a decent opening by shifting the ball all the way over to the left side of the edge of the box, but Kjaergaard didn’t make a proper connection with the strike and that is a tame effort in the end!

40 mins: Kovacic has been excellent for Chelsea so far this evening. Salzburg just can’t get close to the Croatian midfielder who also scored the opening goal for his team.

37 mins: Havertz with the header! The cross was staged up for Havertz, but his header is saved by Kohn! The Chelsea forward might have done better with that after he got up highest to meet the delivery!

35 mins: Save by Kepa! Sucic drives forward with the ball at his feet, the space opened up for the shot, but Kepa makes the save with ease. That was a decent opportunity for the home side.

34 mins: What a chance! Chelsea carve Salzburg open and Aubameyang is played clean through on goal, but the striker hesitates and Kohn comes out to make the save!

33 mins: Chelsea are enjoying a good spell of possession and that is taking the sting out of Salzburg as an attacking outfit. This is very smart play by the Blues who are producing the perfect away performance so far.

29 mins: Salzburg are unbeaten at home in their last 40 matches in all competitions. This isn’t an easy place to visit, but Chelsea have the advantage. If they can hold on, that would be enough to send them into the last 16 of the Champions League.

26 mins: Nearly a second Chelsea goal! The corner kick was played into the box, Aubameyang got his head to it, Kohn made the save and then Havertz couldn’t bundle home the rebound!

23 mins: GOAL! RB Salzburg 0 Chelsea 1 (23′ – Kovacic). Chelsea make the breakthrough! The ball fell to Kovacic on the edge of the box and the Croatian midfielder opened up his foot to guide a shot into the corner of the net! What a finish!

A worldie out of nowhere…

Mateo Kovacic puts Chelsea 1-0 in the lead with this first-time screamer!! ?#UCL pic.twitter.com/dTZ0zGMvnu

22 mins: Even when Chelsea have possession, Salzburg are very well set-up in defence. They are a difficult team to play through.

19 mins: Salzburg have made this a difficult opening 20 minutes for Chelsea with the Austrian champions pressing well and doing a good job of keeping hold of the ball when they have it.

15 mins: Over the bar! Sucic bursts forward from deep and gets the return pass back for a shot, but that effort was never going to trouble Kepa who watches the ball fly over the target.

12 mins: Chelsea started the match on the front foot, but Salzburg have grown into the contest and they are enjoying a good spell of pressure. The Blues have to be careful not to give the home team too much space in the final third.

9 mins: Good clearance! Chalobah was under serious pressure from Bernardo as both players challenged for the ball inside the box, but the Chelsea defender gets his head to it first to clear!

7 mins: Pulisic is now over on the left side and gets the better of his man as he bursts to the byline, but the clearance is made to stop the American winger from finding a Chelsea teammate in the middle.

4 mins: Kohn makes the save! That was nearly a calamity at the back for Salzburg with Havertz pouncing on a weak header back to the goalkeeper, but Kohn did just enough to make the save, although he’s taken a sore one from the Chelsea forward.

3 mins: It looks like Sterling is playing as a left wing back for Chelsea tonight with Pulisic on the right side. That’s interesting. Aubameyang and Havertz are playing as a front two.

1 min: The match is under way in Austraia! It’s Red Bull Salzburg against Chelsea in the Champions League with a place in the last 16 of the competition on the line!

10 mins to KO: Kepa Arrizabalaga has enjoyed an unexpected renaissance as Chelsea goalkeeper over the last month or so. The Spaniard looked finished at Stamford Bridge, but has been in excellent form of late.

“When your manager gives you a shot, you’ve got to take it!”

The team take a look at how Kepa Arrizabalaga has managed to work his way back into Chelsea’s squad under Graham Potter! ?

20 mins to KO: Potter likes to chop and change his team from game-to-game and it will be interesting to see how Chelsea line up for this match. Will Pulisic be playing as a wing back? Is it a 3-4-3 formation?

35 mins to KO: Chelsea come into this match on the back of back-to-back wins over AC Milan. Keep in mind that the Blues started their Champions League campaign this season with a defeat to Dinamo Zagreb. It has been a remarkable turnaround under Potter!

50 mins to KO: Sesko is on the bench for RB Salzburg this evening, but the Austrian champions still have a lot of firepower through Adamu and Okafor. They will be dangerous.

60 mins to KO: Pulisic starts for Chelsea! There’s also a place in the Chelsea XI for Cucurella who was hooked in the first half of Saturday’s 1-1 draw against Manchester United.

75 mins to KO: These two teams drew 1-1 when they met in the first fixture at Stamford Bridge in this season’s Champions League. Red Bull Salzburg are unbeaten in 16 matches in all competitions. They won’t roll over for Chelsea this evening!

Red Bull Salzburg are unbeaten in their last 16 matches in all competitions with the Austrian champions still to suffer defeat in the Champions League this season.

However, Matthias Jaissle has a number of injuries to contend with – Justin Omoregie, Fernando, Ousmane Diakite, Nicolas Capaldo, Sekou Koita and Dijon Kameri are all expected to be sidelined.

Kalidou Koulibaly missed Chelsea’s draw against Manchester United with a knee problem and is sidelined for the Champions League fixture against Red Bull Salzburg in Austria.

Reece James, Wesley Fofana and N’Golo Kante are also missing for the Blues who are short of options in defence.

What time is Red Bull Salzburg vs. Chelsea?

Red Bull Salzburg play host to Chelsea at Red Bull Arena in Salzburg, Austria. It kicks off at 5.45 p.m. BST on Tuesday, October 25.

How to watch Red Bull Salzburg vs. Chelsea

USA: The match will be televised on TUDN USA and UniMas for Spanish listeners with both channels available to be streamed on fuboTV. Paramount+ will provide the English-language stream for subscribers.

Donald Trump’s online fans are contradicting and confusing each other