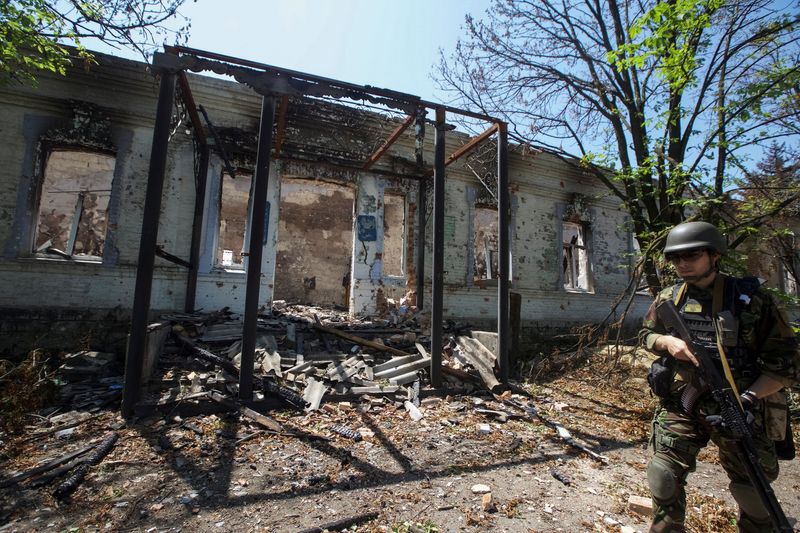 © Reuters. A police officer checks an area during an evacuation of local residents between shelling, amid Russia’s attack on Ukraine, in the village of Novomykhailivka, in Donetsk region, Ukraine May 29, 2022. Picture taken May 29, 2022. REUTERS/Anna Kudriavtseva

By Pavel Polityuk and Max Hunder

KYIV (Reuters) – Ukraine said on Tuesday that Russia had taken control of most of the eastern industrial city of Sievierodonetsk, a bombed-out wasteland whose capture Moscow has made the principal objective of its invasion.

Russia’s all-out assault on the city in Ukraine’s Luhansk province has been met by tough resistance from Ukrainian forces. Russian-backed separatists in Luhansk acknowledged that capturing the city was taking longer than hoped, despite one of the biggest ground attacks of the three-month-long war.

After failing to capture the Ukrainian capital Kyiv and being driven out of northern Ukraine, a Russian victory in Sievierodonetsk and across the Siverskyi Donets river in Lysychansk would bring full control of Luhansk, one of two eastern provinces Moscow claims on behalf of separatists.

Western military analysts say Moscow has drained manpower and firepower from other parts of the eastern front to concentrate on Sievierodonetsk, hoping a massive offensive will secure surrounding Luhansk province for separatist proxies.

Luhansk’s regional governor, Serhiy Gaidai, said nearly all critical infrastructure in Sievierodonetsk had been destroyed and 60% of residential property damaged beyond repair.

“Most of Sievierodonetsk is under the control of the Russians. The town is not surrounded and the prerequisites for it to be are not in place,” Gaidai said. Russian shelling had made it impossible to deliver aid or evacuate people, he added.

A pro-Moscow separatist leader said that fighting was raging in the city but that Russian proxies had advanced slower than expected to “maintain the city’s infrastructure” and exercise caution around its chemical factories.

“We can say already that a third of Sievierodonetsk is already under our control,” Russia’s TASS state news agency quoted Leonid Pasechnik, the leader of the pro-Moscow Luhansk People’s Republic, as saying.

Gaidai warned Sievierodonetsk residents not to leave bomb shelters due to what he said was a Russian air strike on a nitric acid tank. The Luhansk People’s Republic’s police force said Ukraine’s forces had damaged it. Ukraine and Russian-backed separatists traded accusations over a similar incident in April.

Russian President Vladimir Putin “is now hurling men and munitions” at Sievierodonetsk, “as if taking it would win the war for the Kremlin. He is wrong,” the Washington-based Institute for the Study of War wrote this week.

Thousands of residents remain trapped in the city. Russian forces were advancing towards its centre, but slowly, regional governor Gaidai said. Russia’s advance could force Ukrainian troops to retreat across the river to Lysychansk, he added.

Jan Egeland, secretary general of the Norwegian Refugee Council aid agency which had long operated out of Sievierodonetsk, said he was “horrified” by its destruction.

Up to 12,000 civilians remain caught in crossfire, without sufficient access to water, food, medicine or electricity, Egeland said.

“The near-constant bombardment is forcing civilians to seek refuge in bomb shelters and basements, with only few precious opportunities for those trying to escape,” he said.

There were few reports of major shifts elsewhere on the battlefield. In the south, Ukraine claimed to have pushed back Russian forces to the border of Russian-held Kherson province.

Moscow took control of Kherson in March. Residents there have staged protests against Russian occupation. Mobile and internet access in Kherson were shut down on Tuesday, Ukrainian officials said, blaming Russia for disconnecting cables.

There was no immediate Russian comment on the events in Kherson. Ukrainian President Volodymyr Zelenskiy said troops there were fighting on “despite the fact the Russian army has a significant advantage in terms of equipment and numbers.”

Kyiv says weapons sent by the United States and Europe since the start of the invasion have helped them fend off Russian gains. Zelenskiy has urged more weapons while lambasting the European Union, which agreed overnight to cut imports of Russian oil, for not sanctioning energy from Moscow sooner.

U.S. President Joe Biden and his top aides are in the final stages of preparing a new weapons package for Ukraine with an announcement expected soon, possibly as early as Wednesday.

The White House says that while Biden is still considering sending longer-range rocket systems to Ukraine, he does not want them used to launch attacks inside Russia, which U.S. officials fear could broaden the war.

Moscow, responding to the EU oil embargo, widened its gas cuts to Europe in a move that pushed up prices and ratcheted up its economic battle with Brussels.

The EU said it will ban imports of Russian oil by sea. Officials said that would halt two-thirds of Russia’s oil exports to Europe at first, and 90% by the end of this year as

Putin launched his “special operation” in February to disarm and “denazify” Ukraine. Ukraine and its Western allies call this a baseless pretext for a war to seize territory.

In the second war crimes trial to be held in Ukraine, two Russian soldiers were jailed on Tuesday for 11-1/2 years after pleading guilty to shelling civilian targets.

Courage and commitment are key to achieving pay equity goals

It Takes Two: How Couples Maintain Love and Intimacy When One of Them Has Lupus

How Bad Will the Food Shortage Get?