HomeSportsTottenham vs. Liverpool live score, updates and highlights as Kane pulls one...
Sports

Tottenham vs. Liverpool live score, updates and highlights as Kane pulls one back 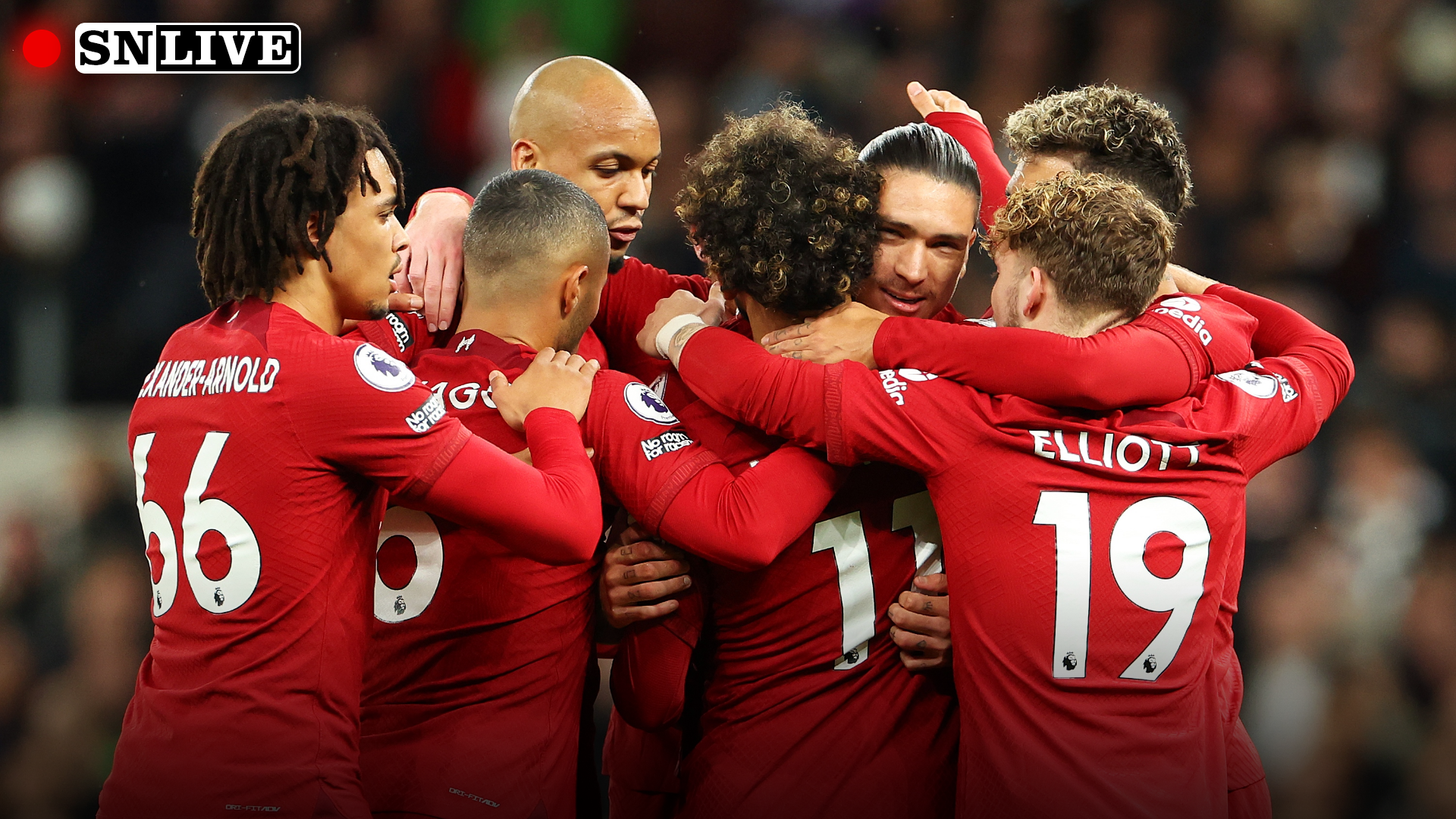 Jurgen Klopp’s description of his side’s trip to Tottenham as “massive” is partly a reflection of the chasmic 10-point lead Spurs will have over Liverpool at the start of the game.

“I didn’t count the points distance between us and them, but we cannot be picky with opponents and games and where we want to get points,” says Klopp.

“We have to go for it, definitely. But it’s difficult: we all know Tottenham are a side that are well organised, defending on an extremely high level and [use] counter-attacking [as] a massive thing now.”

Follow all the action with The Sporting News below…

89th min: Perisic’s inswinger is flicked on at the front post by Kane but Bentancur is a couple of inches too short to reach it.

Spurs getting closer but running out of time.

87th min: A Kulusevski cross floats out of play and Liverpool are now looking to shore things up.

Gomez is on for Nunez as the Reds go to a back five.

82nd min: Nunez hits the bar but the flag is up and it wouldn’t have counted.

It’s a good effort from the Uruguayan on his left foot after being cleverly slipped in by Thiago.

Will that help the Reds seize back some control?

Kulusevski slips a ball in behind for Kane and he finishes from the tightest of angles into the far corner.

The comeback is on!

68th min: Tottenham change things up, with Dejan Kulusevski and Matt Doherty in place of Ryan Sessegnon and Emerson Royal.

58th min: Spurs all over Liverpool, pressing them into mistakes and dominating possession, and yet the visitors have created two really good chances on the break that have brought shots on target from Nunez and Salah.

That about sums up the pattern of the game.

A seemingly harmless ball in behind finds Sessegnon, who pulls back for Perisic to shake the bar when he probably should have done better.

The hosts have started this half well.

48th min: Dier heads a corner goalward but he doesn’t generate much power and Alisson collects quite comfortably.

Encouragement for Spurs, though.

46th min: Back under way in London – can Spurs do it again?

HALFTIME: Boos as the whistle sounds in London. Tottenham are going to need to pull off one of their trademark comebacks to get something out of this one.

Alisson lofts what looks like a harmless ball forward but Dier’s attempted header back to Lloris is read by Salah and he is in for a one-on-one that is finished off with a wonderfully calm dink.

Tottenham with it all to do now.

MO SALAH AT THE DOUBLE! ⭐

Mo Salah gets his brace after a poor header from Eric Dier.

A ???? blunder by the Spurs defender and Mohamed Salah pounces for his second goal.

Dier won’t want to see that one again.

38th min: A break in play as Elliott receives treatment after a clash of knees with Davies during a spell of Liverpool possession.

32nd min: All getting a bit nip and tuck in midfield now, with physical battles and scrappy play the order of the day.

Liverpool will probably take that given their lead but after such a good start to the game they’ll also feel Tottenham are growing into this.

20th min: Tottenham calling for a penalty after Alexander-Arnold nudges Sessegnon in the box but neither the referee or the VAR are interested.

You suspect that wouldn’t have been overturned had it been given on the pitch.

Kane dinks a ball in from the right-hand side and Perisic appears to have beaten Alisson to it but a deflection on his header takes the ball onto the upright.

The Egyptian kicks off a brilliant passage of play from back to front with a clever touch in midfield and is there at the end when Nunez feeds him for a left-footed shot into the bottom corner.

A sharp finish from Mo Salah to put Liverpool in the lead!

Fantastic play from start to finish and The Reds carve Tottenham open.

6th min: A couple of early darts in behind from Nunez show that could be a productive route toward goal for Liverpool today.

Nothing has come from it yet, though.

KICKOFF: Liverpool get the game started through Harvey Elliott.

5 mins to KO: Here come the players – this has all the makings of a cracker.

45 mins to KO: Well, that’s an interesting line-up from Tottenham as Perisic is given the unfamiliar task of partnering Kane in attack with both Richarlison and Son absent.

As for Liverpool, they go with a more forward-thinking midfield in naming Elliott, and that front three is an indication that Klopp’s team are going to go for it.

75 mins to KO: Some interesting team news coming up in 15 minutes.

How will Tottenham line up without both Son and Kulusevski to call upon in attack? And do Liverpool go all out with a Nunez-Firmino-Salah front three?

90 mins to KO: Hello and welcome to The Sporting News’ live coverage of Tottenham vs. Liverpool in the Premier League.

This feels like a do-or-die game for the visitors, whose top-four hopes would surely be over even at this early stage should they suffer defeat. As for the hosts, they are aiming to build on recent confidence-boosting wins both at home and Europe and prove they can stay in the title race.

What time is Tottenham vs. Liverpool?

Tottenham play host to Liverpool at the Tottenham Hotspur Stadium in London, England. It kicks off at 4.30 p.m. GMT on Sunday, November 6.

UK: The match will be televised on Sky Sports and streamed on Sky’s platforms.

USA: The match will air on Telemundo (Spanish), which can be streamed on fuboTV with a free trial for new users. Peacock will also have an English-language stream for subscribers.

Australia: Fans in Australia can stream Premier League matches live and on demand on Optus Sport.

Spurs manager Antonio Conte gives the nod to Ivan Perisic in a front two alongside Harry Kane as Son Heung-min and Richarlison miss out due to injury.

Cristian Romero is also absent but Rodrigo Bentancur is fit enough to start, while Dejan Kulusevski provides a major boost in making the bench.

After a goal and an assist of the bench against Napoli in midweek, Darwin Nunez gets the nod in attack, though he is stationed out on the left rather than in his favoured centre-forward position.

Liverpool have lost one of their past 21 meetings with Spurs — a 4-1 loss back in October 2017. Prior to that, their last defeat to Tottenham came in 2012 at the old White Hart Lane in which Gareth Bale scored at both ends of a 2-1 win for Spurs.

The form books contrast the odds: Tottenham have won five of their six home games in the Premier League this season, while Liverpool are seeking an away victory at the sixth attempt, having lost three times on the road.

Prediction: With those records in mind, a resolute 1-0 win for Tottenham against this patchy Liverpool side could be on the cards. The absence of Son, though, could be telling, robbing Spurs of their most important creative presence and top scorer besides Harry Kane.

Twitter Reportedly Plans to Charge $20 a Month for Verified Accounts