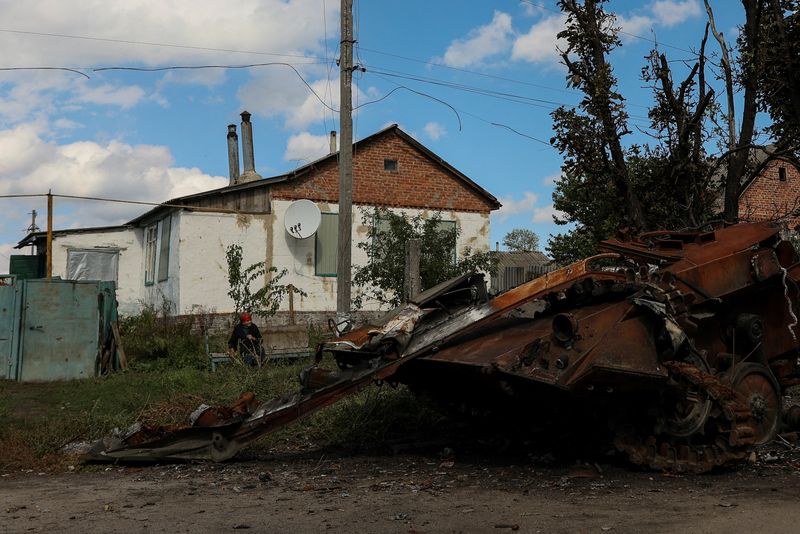 © Reuters. A woman looks at a destroyed Russian armoured fighting vehicle as she rests on a bench in the town of Balakliia, recently liberated by the Ukrainian Armed Forces during a counteroffensive operation, amid Russia’s attack on Ukraine, in Kharkiv region, Ukra

By Pavel Polityuk and Phil Stewart

KYIV (Reuters) -Ukrainian President Volodymyr Zelenskiy vowed there would be no let-up in fighting to regain territory lost to Russia as Kyiv said its troops had advanced to the eastern bank of the Oskil River, threatening Russian occupation forces in the Donbas.

Crossing the Oskil is another important milestone in Ukraine’s counter-offensive in the northeastern Kharkiv region as it flows south to the Siversky Donets River, which goes right through Luhansk, one of two provinces in the Donbas region.

Donbas is Ukraine’s traditional industrial heartland made up of the Donetsk and Luhansk regions.

Ukrainian troops “have pushed across the Oskil. From yesterday, Ukraine controls the east bank,” the Ukrainian Armed Forces wrote on Telegram late Sunday.

Serhiy Gaidai, governor of Luhansk region, wrote on Telegram: “Luhansk region is right next door. Decoccupation is not far away.”

Zelenskiy vowed to keep up the pressure on Moscow after Ukraine’s rapid gains in Kharkiv this month.

“Perhaps it seems to some of you that after a series of victories we now have a lull of sorts,” he said in his regular nightly address on Sunday. “But there will be no lull. There is preparation for the next series … For Ukraine must be free. All of it.”

“Winning the war in Ukraine is to get Russia out of Ukraine completely and to recognise the sovereignty. They’re defeating Russia,” he said in an interview with CBS’s “60 Minutes” broadcast on Sunday.

“Russia’s turning out not to be as competent and capable as many people thought they were going to be.”

Russian artillery pounded towns and villages across the frontlines in the east and south on Sunday, including civilian infrastructure in Zaporizhzhia city, Ukrainian officials said.

“As it faces setbacks on the front lines, Russia has likely extended the locations it is prepared to strike in an attempt to directly undermine the morale of the Ukrainian people and government,” Britain’s defence ministry said.

Ukraine’s southern command on Monday said strikes were also launched on a radar station near Kherson and on a pontoon crossing near Nova Kakhovka east of Kherson, where a Ukrainian counter-offensive has focused on taking out bridges across the Dnipro and Inhulets Rivers.

Reuters was unable to independently verify the battlefield reports.

On Friday, Russian President Vladimir Putin brushed off Ukraine’s swift counteroffensive and said Moscow would respond more forcefully if its troops were put under further pressure.

Such repeated threats have raised concerns Putin could at some point turn to small nuclear weapons or chemical warfare.

U.S. President Joe Biden, asked what he would tell Putin if he was considering using such weapons, replied in the CBS’s “60 Minutes” interview: “Don’t. Don’t. Don’t. It would change the face of war unlike anything since World War Two.”

Some military analysts have said Russia might also stage a nuclear incident at the Zaporizhzhia nuclear power plant held by Russia but run by Ukrainian staff.

U.S. Army General Mark Milley, chairman of the Joint Chiefs of Staff, called for vigilance on Sunday after visiting a base in Poland aiding Ukraine’s war effort.

“The war is not going too well for Russia right now so it’s incumbent upon all of us to maintain high states of readiness, alert,” he said after his trip to the base, which reporters travelling with him were asked not to identify.

With its battlefield losses mounting, the Russian army is seeking contract soldiers for what it calls the “special military operation” in Ukraine, and is offering nearly $3,000 a month as an incentive.

On Saturday, Zelenskiy said authorities had found a mass grave containing the bodies of 17 soldiers in Izium, some of which he said bore signs of torture.

Izium residents have been searching for dead relatives at a forest grave site where workers began exhuming bodies last week. Ukrainian officials said last week they had found 440 bodies in woods near Izium. They said most of the dead were civilians and the causes of death had not been established.

The Kremlin has not commented on the discovery of the graves, but in the past Moscow has repeatedly denied deliberately attacking civilians or committing atrocities.

In Kozacha Lopan, a village some 45 km (30 miles) north of Kharkiv and close to the Russian border, a Reuters reporter was taken to a squalid cellar with rooms fitted with iron bars which officials said had served as a makeshift prison during the occupation.

District Mayor Vyacheslav Zadorenko said the rooms had been used as a “torture cellar” to detain civilians.

Reuters was unable to verify those accounts.

Store-Brand vs. Name-Brand Groceries: How Much Can You Save?